The Poisson approximation to the binomial distribution

The following approximation is a classical one. We wish to show that for small \(p\) and sufficiently large \(n\)

The Poisson and Gamma Distributions

A well known definite integral, obtained by integration by parts, is 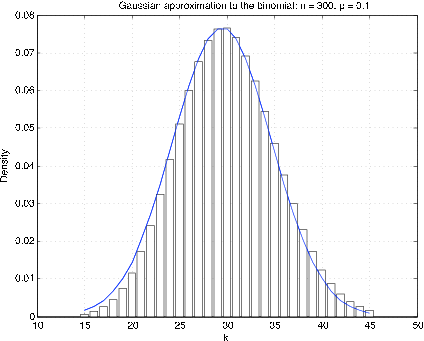 Figure 7.2.8. Gaussian approximation to the binomial.

Use of the generating function shows that the sum of independent Poisson random variables is Poisson. Now if \(X~) Poisson (\(\mu\)), then \(X\) may be considered the sum of \(n\) independent random variables, each Poisson (\(\mu/n\)). Since the mean value and the variance are both \(\mu\), it is reasonable to suppose that suppose that \(X\) is approximately \(N(\mu, \mu)\).

It is generally best to compare distribution functions. Since the binomial and Poisson distributions are integer-valued, it turns out that the best Gaussian approximation is obtained by making a “continuity correction.” To get an approximation to a density for an integer-valued random variable, the probability at \(t = k\) is represented by a rectangle of height \(p_k\) and unit width, with \(k\) as the midpoint. Figure 1 shows a plot of the “density” and the corresponding Gaussian density for \(n = 300\), \(p = 0.1\). It is apparent that the Gaussian density is offset by approximately 1/2. To approximate the probability \(X \le k\), take the area under the curve from \(k\) + 1/2; this is called the continuity correction.

Use of m-procedures to compare

We have two m-procedures to make the comparisons. First, we consider approximation of the Before examining a general approximation procedure which has significant consequences for later treatments, we consider some illustrative examples.

A random variable with the Poisson distribution is unbounded. However, for a given parameter value μ, the probability for \(k \ge n\), \(n\) sufficiently large, is negligible. Experiment indicates \(n = \mu + 6\sqrt{\mu}\) (i.e., six standard deviations beyond the mean) is a reasonable value for \(5 \le \mu \le 200\).

An m-procedure for discrete approximation

If \(X\) is bounded, absolutely continuous with density functon \(f_X\), the m-procedure tappr sets up the distribution for an approximating simple random variable. An interval containing the range of \(X\) is divided into a specified number of equal subdivisions. The probability mass for each subinterval is assigned to the midpoint. If \(dx\) is the length of the subintervals, then the integral of the density function over the subinterval is approximated by \(f_X(t_i) dx\). where \(t_i\) is the midpoint. In effect, the graph of the density over the subinterval is approximated by a rectangle of length \(dx\) and height \(f_X(t_i)\). Once the approximating simple distribution is established, calculations are carried out as for simple random variables.

Because of the regularity of the density and the number of approximation points, the result agrees quite well with the theoretical value.

The next example is a more complex one. In particular, the distribution is not bounded. However, it is easy to determine a bound beyond which the probability is negligible. We show now that any bounded real random variable may be approximated as closely as desired by a simple random variable (i.e., one having a finite set of possible values). For the unbounded case, the approximation is close except in a portion of the range having arbitrarily small total probability.

Figure 7.2.15. Refinement of the partition by additional subdividion points.

Since this is true for each \(\omega\) and the corresponding subinterval, we have the important fact

By making the subintervals small enough by increasing the number of subdivision points, we can make the difference as small as we please.

For probability calculations, we simply select an interval \(I\) large enough that the probability outside \(I\) is negligible and use a simple approximation over \(I\).