There are two more descriptive statistics that you will sometimes see reported in the psychological literature, known as skew and kurtosis. In practice, neither one is used anywhere near as frequently as the measures of central tendency and variability that we’ve been talking about. Skew is pretty important, so you do see it mentioned a fair bit; but I’ve actually never seen kurtosis reported in a scientific article to date. Since it’s the more interesting of the two, let’s start by talking about the skewness. Skewness is basically a measure of asymmetry, and the easiest way to explain it is by drawing some pictures. As Figure 5.4 illustrates, if the data tend to have a lot of extreme small values (i.e., the lower tail is “longer” than the upper tail) and not so many extremely large values (left panel), then we say that the data are negatively skewed. On the other hand, if there are more extremely large values than extremely small ones (right panel) we say that the data are positively skewed. That’s the qualitative idea behind skewness. The actual formula for the skewness of a data set is as follows

where N is the number of observations, \(\bar{X}\) is the sample mean, and \(\hat{\sigma}\) is the standard deviation (the “divide by N−1” version, that is). Perhaps more helpfully, it might be useful to point out that the psych package contains a skew() function that you can use to calculate skewness. So if we wanted to use this function to calculate the skewness of the afl.margins data, we’d first need to load the package

which now makes it possible to use the following command:

Not surprisingly, it turns out that the AFL winning margins data is fairly skewed.

The final measure that is sometimes referred to, though very rarely in practice, is the kurtosis of a data set. Put simply, kurtosis is a measure of the “pointiness” of a data set, as illustrated in Figure 5.5. 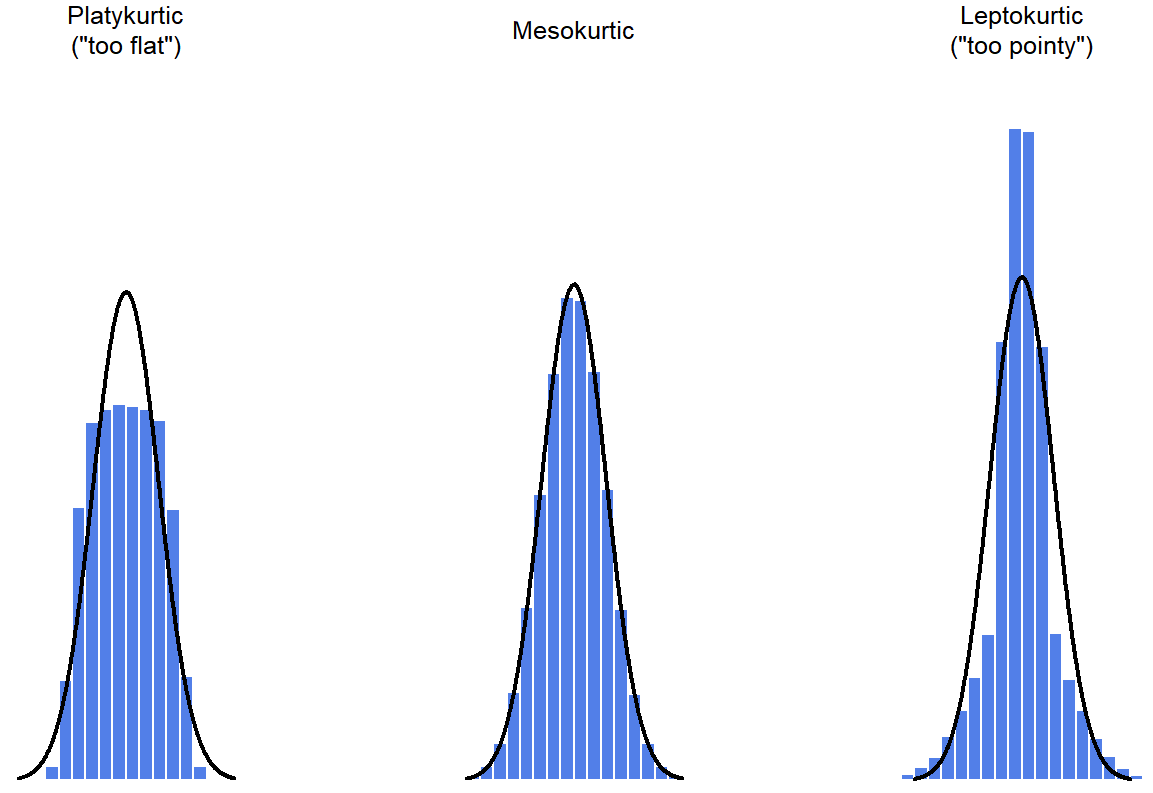 By convention, we say that the “normal curve” (black lines) has zero kurtosis, so the pointiness of a data set is assessed relative to this curve. In this Figure, the data on the left are not pointy enough, so the kurtosis is negative and we call the data platykurtic. The data on the right are too pointy, so the kurtosis is positive and we say that the data is leptokurtic. But the data in the middle are just pointy enough, so we say that it is mesokurtic and has kurtosis zero. This is summarised in the table below:

I know, it’s not terribly interesting to me either. More to the point, the psych package has a function called kurtosi() that you can use to calculate the kurtosis of your data. For instance, if we were to do this for the AFL margins,

we discover that the AFL winning margins data are just pointy enough.