Fitting solely independent and identically distributed random variables to data is too narrow a concept. While, on one hand, they allow for a somewhat nice and easy mathematical treatment, their use is, on the other hand, often hard to justify in applications. Our goal is therefore to introduce a concept that keeps some of the desirable properties of independent and identically distributed random variables ("regularity''), but that also considerably enlarges the class of stochastic processes to choose from by allowing dependence as well as varying distributions. Dependence between two random variables \(X\) and \(Y\) is usually measured in terms of the \(covariance\) \(function\)

With these notations at hand, the classes of strictly and weakly dependent stochastic processes can be introduced.

holding true for all \(x_1,...,x_n\in\mathbb{R}\), \(t_1,...,t_n\in T\) and \(h\) such that \(t_1+h,...,t_n+h\in T\). This can be quite difficult to check for a given time series, especially if the generating mechanism of a time series is far from simple, since too many model parameters have to be estimated from the available data, rendering concise statistical statements impossible. A possible exception is provided by the case of independent and identically distributed random variables.

To get around these difficulties, a time series analyst will commonly only specify the first- and second-order moments of the joint distributions. Doing so then leads to the notion of weak stationarity.

This section is concluded with examples of stationary and nonstationary stochastic processes. 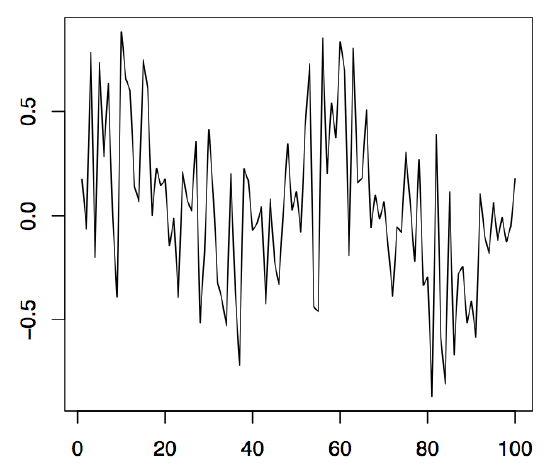 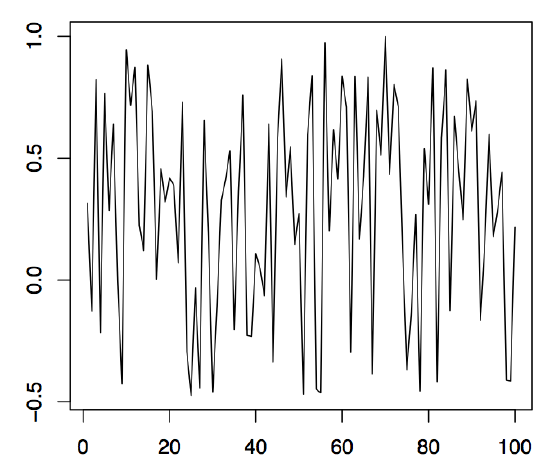 The command rnorm simulates here 1000 normal random variables with mean 0 and variance 1. There are various built-in random variable generators in R such as the functions runif(n,a,b) and rbinom(n,m,p) which simulate the \(n\) values of a uniform distribution on the interval \((a,b)\) and a binomial distribution with repetition parameter \(m\) and success probability \(p\), respectively. 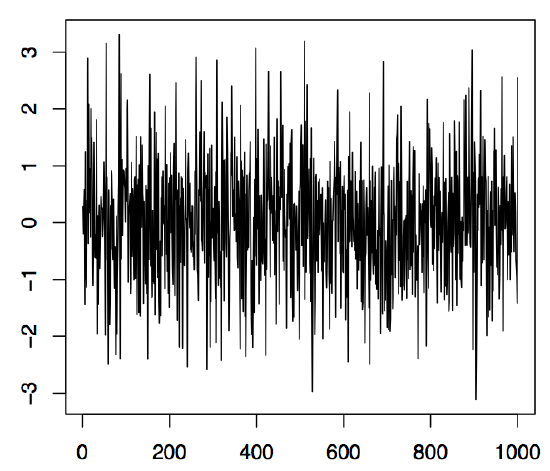 This produces the left panel of Figure 1.5. The middle and right panels follow in a similar fashion.

> rw = cumsum(z)
The function cumsum takes as input an array and returns as output an array of the same length that contains as its jth entry the sum of the first j input entries. The resulting time series plot is shown in the right panel of Figure 1.6.

Chapter 3 discusses in detail so-called autoregressive moving average processes which have become a central building block in time series analysis. They are constructed from white noise sequences by an application of a set of stochastic difference equations similar to the ones defining the random walk \((S_t\colon t\in\mathbb{N}_0)\) of Example 1.2.3.

The estimated values are all very close to the true ones, indicating that the estimators work reasonably well for n = 1,000. Indeed it can be shown that they are asymptotically unbiased and consistent. Moreover, the sample autocorrelations \(\hat{\rho}(h)\) are approximately normal with zero mean and variance \(1/1000\). See also Theorem 1.2.1 below. In R, the function acf can be used to compute the sample ACF.

Theorem 1.2.1 and Example 1.2.4 suggest a first method to assess whether or not a given data set can be modeled conveniently by a white noise sequence: for a white noise sequence, approximately 95% of the sample ACFs should be within the the confidence interval \(\pm2/\sqrt{n}\). Using the data files on the course webpage, one can compute with R the corresponding sample ACFs to check for whiteness of the underlying time series. The properties of the sample ACF are revisited in Chapter 2. 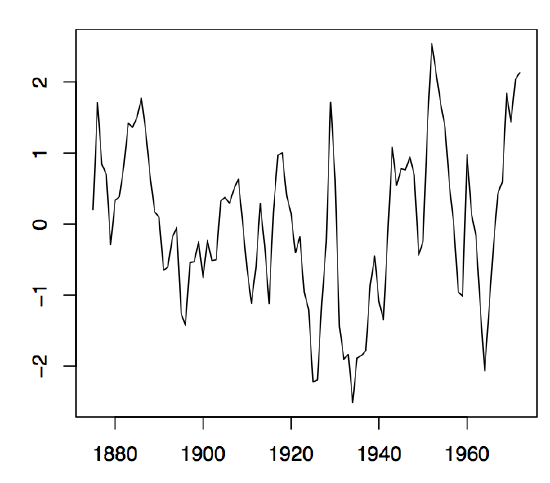