We have already gone into detail about how to plot points on a number line, and that is very useful for single variable presentations. Now we will move to questions that involve comparing two variables. Working with two variables is frequently encountered in statistical studies and we would like to be able to display the results graphically. This is best done by plotting points in the xy-plane.

The first thing to do when plotting points is to sketch the x-axis and y-axis and decide on the tick marks. Here the numbers are all less than 5, so it is reasonable to count by 1's. Next, we plot the first point, \((3,4)\). This means to start at the origin, where the axes intersect. Then move 3 units to the right and 4 units up. After arriving there, we just draw a dot. For the next point, \((-2,1)\), we start at the origin, move 2 units to the left and 1 unit up and draw the dot. For the third point, \((0,-1)\), we don't move left or right at all since the x-coordinate is 0, but we do move 1 unit down and draw the dot. The plot is shown below. A survey was done to look at the relationship between a person's age and their income. The first three answers are shown in the table below:

Graph the three points on the xy-plane.

Notice that the numbers are all relatively large. Therefore counting by 1's would not make sense. Instead, it makes better sense to count the Age axis, \(x\), by 10's and the Income axis, \(y\), by 1000's. The points are plotted below. 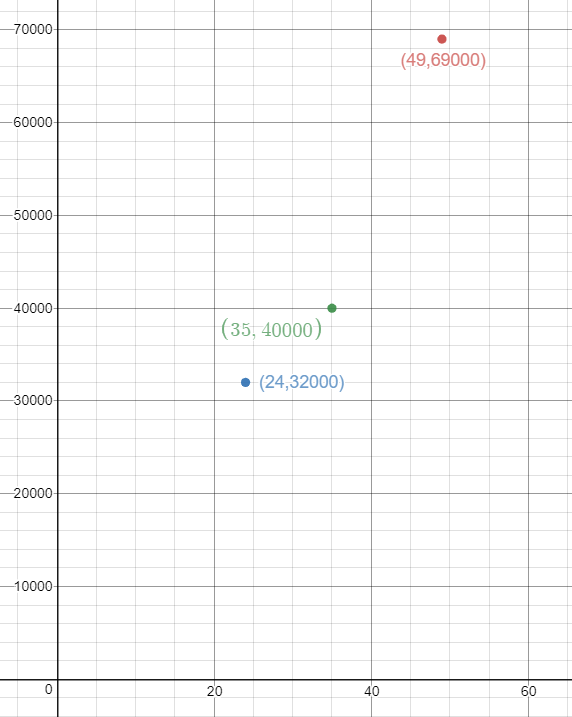