If you want to figure out the distribution of the change people carry in their pockets, using the central limit theorem and assuming your sample is large enough, you will find that the distribution is normal and bell-shaped. (credit: John Lodder)

Why are we so concerned with means? Two reasons are: they give us a middle ground for comparison, and they are easy to calculate. In this chapter, you will study means and the central limit theorem.

The central limit theorem (clt for short) is one of the most powerful and useful ideas in all of statistics. There are two alternative forms of the theorem, and both alternatives are concerned with drawing finite samples size n from a population with a known mean, μ, and a known standard deviation, σ. The first alternative says that if we collect samples of size n with a “large enough n,” calculate each sample’s mean, and create a histogram of those means, then the resulting histogram will tend to have an approximate normal bell shape. The second alternative says that if we again collect samples of size n that are “large enough,” calculate the sum of each sample and create a histogram, then the resulting histogram will again tend to have a normal bell-shape. 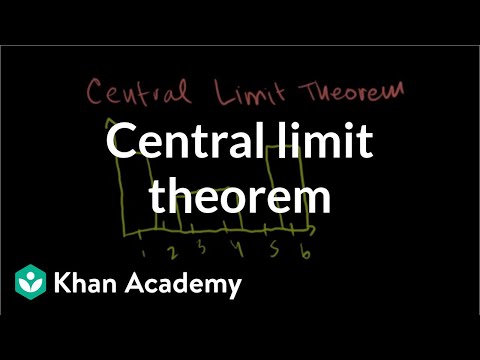 A YouTube element has been excluded from this version of the text. You can view it online here: http://pb.libretexts.org/esm/?p=96