We have learned the details for two chi-square tests, the goodness-of-fit test, and the test of independence. Now we focus on the third and last chi-square test that we will learn, the test for homogeneity. This test determines if two or more populations (or subgroups of a population) have the same distribution of a single categorical variable.

The test of homogeneity expands the test for a difference in two population proportions, which is the two-proportion Z-test we learned in Inference for Two Proportions. We use the two-proportion Z-test when the response variable has only two outcome categories and we are comparing two populations (or two subgroups.) We use the test of homogeneity if the response variable has two or more categories and we wish to compare two or more populations (or subgroups.)

We can answer the following research questions with a chi-square test of homogeneity:

Note: Homogeneous means the same in structure or composition. This test gets its name from the null hypothesis, where we claim that the distribution of the responses are the same (homogeneous) across groups.

To test our hypotheses, we select a random sample from each population and gather data on one categorical variable. As with all chi-square tests, the expected counts reflect the null hypothesis. We must determine what we expect to see in each sample if the distributions are identical. As before, the chi-square test statistic measures the amount that the observed counts in the samples deviate from the expected counts.

Steroid Use in Collegiate Sports

In 2006, the NCAA published a report called “Substance Use: NCAA Study of Substance Use of College Student-Athletes.” We use data from this report to investigate the following question: Does steroid use by student athletes differ for the three NCAA divisions?

To see the NCAA report on substance use, click here.

A note on NCAA divisions: The National Collegiate Athletic Association (NCAA) is divided into three divisions and oversees a wide range of collegiate sports. Division I schools have to sponsor more sports teams. These schools tend to be large universities with large athletic budgets supplemented by revenue from the games. They must offer athletic scholarships. Division II schools tend to be the smaller public universities and many private institutions. They have much smaller budgets that come solely from the college. The NCAA limits the amount Division II colleges can spend on athletic scholarships. Division III consists of colleges and universities that treat athletics as an extracurricular activity for students, instead of a source of revenue. These institutions do not offer athletic scholarships.

Note: These hypotheses imply that the proportion of athletes not using steroids is also the same in each of the three NCAA divisions, so we don’t need to state this explicitly. For example, if 2% of the athletes in each division are using steroids, then 98% are not.

Here is an alternative way we could state the hypotheses for a test of homogeneity.

We summarized the data from these three samples in a two-way table.

We use percentages to compare the distributions of yes and no responses in the three samples. This step is similar to our data analysis for the test of independence. 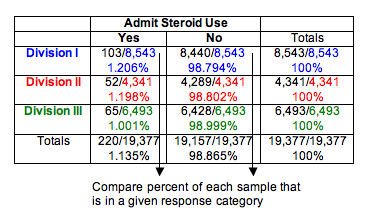 We can see that Division I and Division II schools have essentially the same percentage of athletes who admit steroid use (about 1.2%). Not surprisingly, the least competitive division, Division III, has a slightly lower percentage (about 1.0%). Do these results suggest that the proportion of athletes using steroids is the same for the three divisions? Or is the difference seen in the sample of Division III schools large enough to suggest differences in the divisions? After all, the sample sizes are very large. We know that for large samples, a small difference can be statistically significant. Of course, we have to conduct the test of homogeneity to find out.

Note: We decided not to use ribbon charts for visual comparison of the three distributions because the percentage admitting steroid use is too small in each sample to be visible.

We need to determine the expected values and the chi-square test statistic so that we can find the P-value.

Calculating Expected Values for a Test of Homogeneity

Expected counts always describe what we expect to see in a sample if the null hypothesis is true. In this situation, we expect the percentage using steroids to be the same for each division. What percentage do we use? We find the percentage using steroids in the combined samples. This calculation is the same as we did when finding expected counts for a test of independence, though the logic of the calculation is subtly different.

Here are the calculations for the response “yes”:

Expected count of steroid users for Division I is 1.135% of Division I sample:

The conditions for use of the chi-square distribution are the same as we learned previously:

Since this data meets the conditions, we can proceed with calculating the χ2 test statistic.

There are no changes in the way we calculate the chi-square test statistic.

We use technology to calculate the chi-square value. For this example, we show the calculation. There are six terms, one for each cell in the 3 × 2 table. (We ignore the totals, as always.)

Finding Degrees of Freedom and the P-Value

For chi-square tests based on two-way tables (both the test of independence and the test of homogeneity), the degrees of freedom are (r − 1)(c − 1), where r is the number of rows and c is the number of columns in the two-way table (not counting row and column totals). In this case, the degrees of freedom are (3 − 1)(2 − 1) = 2.

We use the chi-square distribution with df = 2 to find the P-value. The P-value is large (0.4561), so we fail to reject the null hypothesis. The data does not provide strong enough evidence to conclude that steroid use differs in the three NCAA divisions (P-value = 0.4561).

First Use of Anabolic Steroids by NCAA Athletes

The NCAA survey includes this question: “When, if ever, did you start using anabolic steroids?” The response options are: have never used, before junior high, junior high, high school, freshman year of college, after freshman year of college. We focused on those who admitted use of steroids and compared the distribution of their responses for the years 1997, 2001, and 2005. (These are the years that the NCAA conducted the survey. Counts are estimates from reported percentages and sample size.) Recall that the NCAA uses random sampling in its sampling design.

Please click here to open the simulation for use in the following activity.

We now know the details for the chi-square test for homogeneity. We conclude with two activities that will give you practice recognizing when to use this test.

Steroid Use for Male Athletes in NCAA Sports

We plan to compare steroid use for male athletes in NCAA baseball, basketball, and football. We design two different sampling plans.

Test of Independence for a Two-Way Table

Test of Homogeneity for a Two-Way Table

Both tests use the same chi-square test statistic.

A chi-square model is a good fit for the distribution of the chi-square test statistic only if the following conditions are met: