Now we use the simulation and the standard normal curve to find the probabilities associated with any normal density curve.

The length (in days) of a randomly chosen human pregnancy is a normal random variable with μ = 266, σ = 16. So X = length of pregnancy (in days)

(a) What is the probability that a randomly chosen pregnancy will last less than 246 days? (b) Suppose a pregnant woman’s husband has scheduled his business trips so that he will be in town between the 235th and 295th days of her pregnancy. What is the probability that the birth will take place during that time?

Compute the z-scores for each of these x-values:

Use the simulation to find the area under the standard normal curve between these two z-scores. 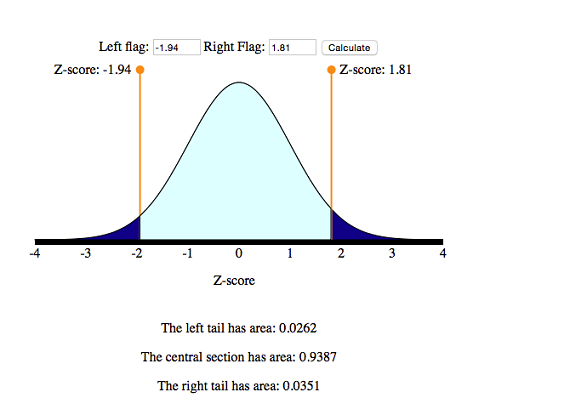 There is about a 94% probability that he will be home for the birth. Looks like he planned well.

The previous examples all followed the same general form: Given values of a normal random variable, we found an associated probability. The two basic steps in the solution process were as follows:

The next example is a different type of problem: Given a probability, we will find the associated value of the normal random variable. The solution process will go in reverse order.

Foot length (in inches) of a randomly chosen adult male is a normal random variable with a mean of 11 and standard deviation of 1.5. So X = foot length (inches).

(a) Suppose that an XL sock is designed to fit the largest 30% of men’s feet. What is the smallest foot length that fits an XL sock?

Step 1: Use the simulation to convert the probability to a statement about z-scores.

We want to mark off the largest 30% of the distribution, so the probability to the right of the z-score is 30%. This means that 70% of the area is to the left of the z-score. From the simulation, we can see that the corresponding z-score is 0.52.

Step 2: Now we need to convert this z-score to a foot length.

Before we calculate the length, note that the z-score is about 0.5, so the x-value will be about 0.5 standard deviations above the mean.

Conclusion: A foot length of 11.75 inches is the shortest foot for an XL sock.

(b) What is the first quartile for the men’s foot lengths?

Step 1: Use the simulation to convert this probability into a statement about z-scores.

We want to mark off the smallest 25% of the distribution, so the probability to the left of the z-score is 25%. From the simulation, we can see that the corresponding z-score is −0.67.

Step 2: Convert this z-score to a foot length. If X is the foot length we seek, then X is 0.67 standard deviations below the mean. That is,

Conclusion: The first quartile mark is 9.995 inches, so about 25% of the men’s feet are shorter than 10 inches.

In the preceding example (specifically step 2), we found the x-value by reasoning about the meaning of the z-score. We can also develop a formula for this process.

Recall the definition of z-score. In words, the z-score of an x-value is the number of standard deviations X is away from the mean. As a formula, this is

We can solve this equation for X as follows:

This gives us a formula for finding X from Z. You can use this formula in step 2 of a work-backwards problem.

Are You Ready for the Checkpoint?