Remember, qualitative data are words describing a characteristic of the individual. There are several different graphs that are used for qualitative data. These graphs include bar graphs, Pareto charts, and pie charts.

Pie charts and bar graphs are the most common ways of displaying qualitative data. A spreadsheet program like Excel can make both of them. The first step for either graph is to make a frequency or relative frequency table. A frequency table is a summary of the data with counts of how often a data value (or category) occurs.

Suppose you have the following data for which type of car students at a college drive. How can we analyze the data?

A listing of data is too hard to look at and analyze, so you need to summarize it. First you need to decide the categories. In this case it is relatively easy; just use the car type. However, there are several cars that only have one car in the list. In that case it is easier to make a category called other for the ones with low values. Now just count how many of each type of cars there are. For example, there are 5 Fords, 12 Chevys, and 6 Hondas. This can be put in a frequency distribution:

The total of the frequency column should be the number of observations in the data.

Since raw numbers are not as useful to tell other people it is better to create a third column that gives the relative frequency of each category. This is just the frequency divided by the total. As an example for Ford category:

This can be written as a decimal, fraction, or percent. You now have a relative frequency distribution:

The relative frequency column should add up to 1.00. It might be off a little due to rounding errors.

Now that you have the frequency and relative frequency table, it would be good to display this data using a graph. There are several different types of graphs that can be used: bar chart, pie chart, and Pareto charts.

Bar graphs or charts consist of the frequencies on one axis and the categories on the other axis. Then you draw rectangles for each category with a height (if frequency is on the vertical axis) or length (if frequency is on the horizontal axis) that is equal to the frequency. All of the rectangles should be the same width, and there should be equally width gaps between each bar.

Put the frequency on the vertical axis and the category on the horizontal axis.

Then just draw a box above each category whose height is the frequency.

You can also use MS Excel or Google Sheets to create a bar graph from the frequency table. Notice from the graph, you can see that Toyota and Chevy are the more popular car, with Nissan not far behind. Ford seems to be the type of car that you can tell was the least liked, though the cars in the other category would be liked less than a Ford.

Some key features of a bar graph:

First you need the relative frequencies.

Then you multiply each relative frequency by 360° to obtain the angle measure for each category.

Now draw the pie chart using a compass, protractor, and straight edge. Technology is preferred. If you use technology, there is no need for the relative frequencies or the angles. Technology like MS Excel or Google Sheets will create pie charts very quickly. Pie charts are useful for comparing sizes of categories. Bar charts show similar information. It really doesn’t matter which one you use. It really is a personal preference and also what information you are trying to address. However, pie charts are best when you only have a few categories and the data can be expressed as a percentage. The data doesn’t have to be percentages to draw the pie chart, but if a data value can fit into multiple categories, you cannot use a pie chart. As an example, if you are asking people about what their favorite national park is, and you say to pick the top three choices, then the total number of answers can add up to more than 100% of the people involved. So you cannot use a pie chart to display the favorite national park.

A third type of qualitative data graph is a Pareto chart, which is just a bar chart with the bars sorted with the highest frequencies on the left. Here is the Pareto chart for the data in Example 2.1.1. The advantage of Pareto charts is that you can visually see the more popular answer to the least popular. This is especially useful in business applications, where you want to know what services your customers like the most, what processes result in more injuries, which issues employees find more important, and other type of questions like these.

There are many other types of graphs that can be used on qualitative data. There are spreadsheet software packages that will create most of them, and it is better to look at them to see what can be done. It depends on your data as to which may be useful. The next example illustrates one of these types known as a multiple bar graph.

In the Wii Fit game, you can do four different types of exercises: yoga, strength, aerobic, and balance. The Wii system keeps track of how many minutes you spend on each of the exercises everyday. The following graph is the data for Dylan over one week time period. Discuss any indication you can infer from the graph. 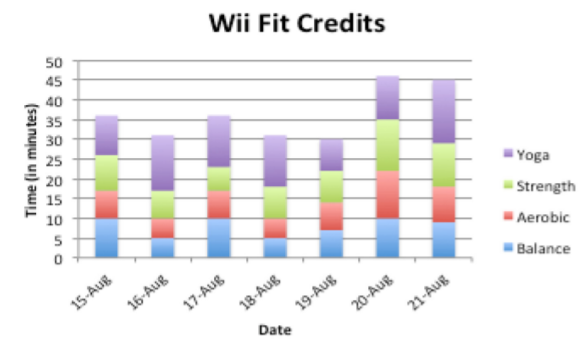 It appears that Dylan spends more time on yoga exercises than on any other exercises on any given day. He seems to spend less time on strength exercises on a given day. There are several days when the amount of exercise in the different categories is almost equal.

The usefulness of a multiple bar graph is the ability to compare several different categories over another variable, in Example 2.1.4 the variable would be time. This allows a person to interpret the data with a little more ease.