On the previous page, we looked at determining hypotheses for testing a claim about a population proportion. On this page, we look at how to determine P-values.

We did this on the previous page. The hypotheses are:

where p is the proportion of college students ages 18 to 23 who have health insurance now.

Because these are both more than 10, we can use the normal model to find the P-value.

For this example, we calculate:

In this situation, we want the area to the right of 0.83 because the alternative hypothesis is a “greater-than” statement. The P-value, in this case, is the probability of getting a sample proportion equal to or greater than 0.83. Since we are using the standard normal curve to find probabilities, the P-value is the area to the right of the Z = 2.12.

We can find this area with a simulation or other technology. 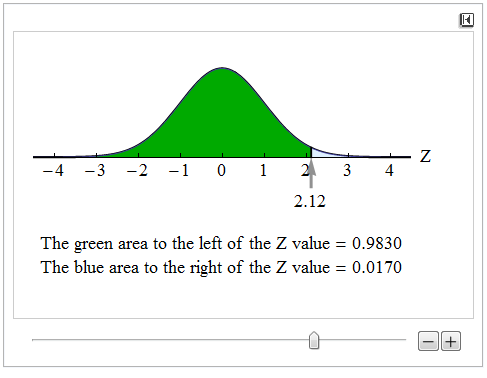 The P-value is our evidence of statistical significance. It is a measure of whether random chance can explain the deviation of the data from the null hypothesis.

To determine our conclusion, we compare the P-value to the level of significance, α = 0.05. If our data are predicted to occur by chance less than 5% of the time, we have reason to reject the null hypothesis and accept the alternative. Since our P-value of 0.017 is less than 0.05, we reject the null hypothesis. We state our conclusion in terms of the alternative hypothesis. We also state it in context.

Alternatively, we can give the conclusion using the percentage rather than the decimal: Use a level of significance of α = 0.05 for this hypothesis test.

where p is the proportion of children ages 8 to 18 with Internet access at home now.

Our sample is random, so there is no problem there. Again, we want to determine whether the normal model is a good fit for the sampling distribution of sample proportions. Based on the null hypothesis, we will use 0.84 as our population proportion to check the conditions.

Because these are both more than 10, we can use the normal model to find the P-value.

Next, we calculate our Z-score, the test statistic: 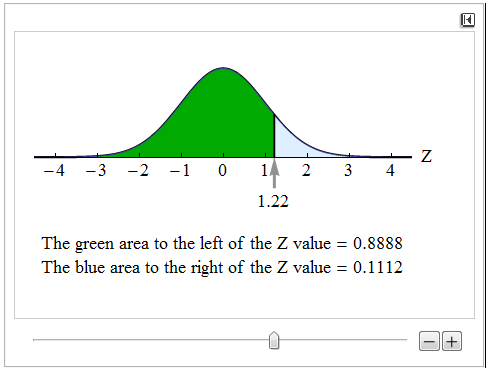 Again we compare the P-value to the level of significance, α = 0.05. In this case, the P-value of 0.22 is greater than 0.05, which means we do not have enough evidence to reject the null hypothesis. A sample result that could occur 22% of the time by chance alone is not statistically significant. Now we can state the conclusion in terms of the alternative hypothesis.

The data from this study does not provide evidence that is strong enough to conclude that the proportion of all children ages 8 to 18 who have Internet access at home has changed since 2009 (P-value = 0.22). The 2% change observed in the data is not statistically significant. These results can be explained by predictable variation in random samples.

Note about the Conclusion

Researchers often note improvements that could be made in their research and suggest follow-up research that might be done. In our example, a second sample with a larger sample size might provide the evidence needed to reject the null hypothesis.

The important thing to keep in mind is that at the end of a hypothesis test, we never say that the null hypothesis is true.

Recall the scenario from the previous page. A psychic claims to be able to predict the outcome of coin flips before they happen. Someone who guesses randomly will predict about half of coin flips correctly. In 100 flips, the psychic correctly predicts 57 flips. Do the results of this test indicate that the psychic does better than random guessing? The hypotheses are

where p is the proportion of correct coin flip predictions by the psychic.