Example \(\PageIndex{1}\) if there is a relationship

To aid in figuring out if there is a relationship, it helps to draw a scatter plot of the data. It is helpful to state the random variables, and since in an algebra class the variables are represented as x and y, those labels will be used here. It helps to state which variable is x and which is y. This scatter plot looks fairly linear. However, notice that there is one beer in the list that is actually considered a non-alcoholic beer. That value is probably an outlier since it is a non-alcoholic beer. The rest of the analysis will not include O’Doul’s. You cannot just remove data points, but in this case it makes more sense to, since all the other beers have a fairly large alcohol content. Given a collection of paired sample data, the regression equation is

The residuals are the difference between the actual values and the estimated values.

SS stands for sum of squares. So you are summing up squares. With the subscript xy, you aren’t really summing squares, but you can think of it that way in a weird sense.

The easiest way to find the regression equation is to use the technology.

Assumptions of the regression line:

Example \(\PageIndex{2}\) find the equation of the regression line

Table 10.1.2: Alcohol and Caloric Content in Beer without Outlier 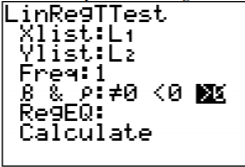 From this you can see that

Remember, this is an estimate for the true regression. A different random sample would produce a different estimate.

If you are drinking a beer that is 2.00% alcohol content, then it has probably close to 78 calories. This doesn’t seem like a very good estimate. This estimate is what is called extrapolation. It is not a good idea to predict values that are far outside the range of the original data. This is because you can never be sure that the regression equation is valid for data outside the original data.

You can use R to get the residuals. The command is

Then residual(lm.out) – produces the residuals.

For this example, the command would be

You can then graph the residuals versus the independent variable using the plot command. For this example, the command would be plot(alcohol, residuals(lm.out), main="Residuals for Beer Calories versus Alcohol Content", xlab="Alcohol Content", ylab="Residuals"). Sometimes it is useful to see the x-axis on the graph, so after creating the plot, type the command abline(0,0).

The graph of the residuals versus the x-values is in Figure 10.1.5. They appear to be somewhat random. An example of this is when you use regression to come up with an equation to predict the growth of a city, like Flagstaff, AZ. Based on analysis it was determined that the population of Flagstaff would be well over 50,000 by 1995. However, when a census was undertaken in 1995, the population was less than 50,000. This is because they extrapolated and the growth factor they were using had obviously changed from the early 1990’s. Growth factors can change for many reasons, such as employment growth, employment stagnation, disease, articles saying great place to live, etc. Realize that when you extrapolate, your predicted value may not be anywhere close to the actual value that you observe.

What does the slope mean in the context of this problem?

The calories increase 26.3 calories for every 1% increase in alcohol content.

The y-intercept in many cases is meaningless. In this case, it means that if a drink has 0 alcohol content, then it would have 25.0 calories. This may be reasonable, but remember this value is an extrapolation so it may be wrong.

Consider the residuals again. According to the data, a beer with 6.7% alcohol has 215 calories. The predicted value is 201 calories.

The following example demonstrates the process to go through when using the formulas for finding the regression equation, though it is better to use technology. This is because if the linear model doesn’t fit the data well, then you could try some of the other models that are available through technology.

Example \(\PageIndex{3}\) calculating the regression equation with the formula

For each problem, state the random variables. Also, look to see if there are any outliers that need to be removed. Do the regression analysis with and without the suspected outlier points to determine if their removal affects the regression. The data sets in this section are used in the homework for sections 10.2 and 10.3 also.

For regression, only the equation is given. See solutions for the entire answer.